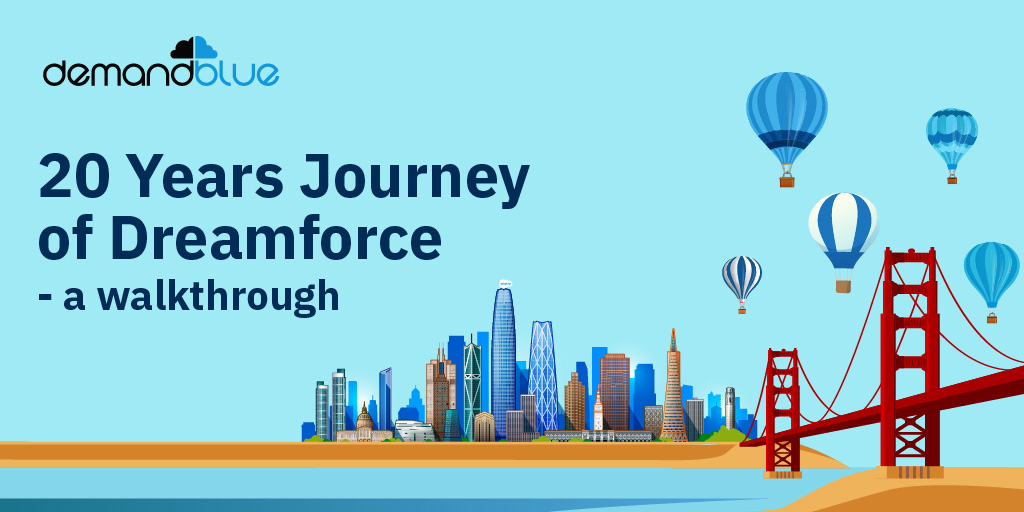 Since its first edition in 2003, Dreamforce has evolved beyond just a tech conference for devoted database techies—the trailblazers. Dreamforce started as a small event at the Hilton in San Francisco with a few more than 1,000 people and 50 or so sessions. Today Dreamforce stands tall and provides an unparalleled and dynamic experience like no other.

Dreamforce inspires its community with never-ending surprises and charm. It brings together the Trailblazer community to learn and network on all things Salesforce The three-day experience can feel like an epic family reunion. Don’t be surprised if at the end of it you are inspired to build the future of technology. If you are new to this global tech conference, Here’s a brief about the happenings at Dreamforce 2022 to get you started.

As we all know, this year will be extra special and fun for the Trailblazers’ community as Dreamforce steps into its 20th anniversary. Unlike the virtual event organized due to the pandemic, this year, Dreamforce planned to embrace a hybrid approach to help trailblazers connect from their comfort zone. So, don’t fret about missing the registration; you can watch it exclusively on Salesforce+.

Throughout these years, Dreamforce never missed amazing trailblazers with its groundbreaking innovations and full-filled learning sessions. And this year is no different.

As we prepare to experience yet another unforgettable Dreamforce 2022, let’s reminisce some of our best moments from the past:

2021: Going digital was the theme. Dreamforce released Salesforce+, an exclusive platform to enable its community to interact and watch live sessions in their comfort from anywhere.

2019: Trailblazers from 120 countries and the 50 U.S. states were gathered at the National Park witnessing an impressive line of speakers, including former President Barack Obama, CEO of Apple, Olympic Champions, and more.

2016: The introduction of Einstein took center stage, making Salesforce as world’s No.1 intelligent CRM. It was also the first time when Dreamforce debuted in Dreampitch in the presence of legendary investors like Mark Cuban.

2015: Salesforce docked the “Dreamboat” cruise to provide extra accommodations for its attendees when San Francisco ran short of hotels.

2014: Dreamforce donated 1 million meals. Also, it was announced as one of the largest nonprofit tech conferences, with 7,000 nonprofits in attendance.

2012: San Francisco’s Howard Street was closed off since Dreamforce had more than 70,000+ registered attendees.

2010: Salesforce live broadcasted Dreamforce for the first time attracting more than 20,000+ viewers from all around the world.

2008: Being an early adopter of Twitter, Dreamforce achieved a new landmark witnessing more than 10,000+ attendees.

2006: AppExchange Incubator was launched to help companies align with Salesforce and proliferate.

DemandBlue has been a part of Dreamforce since 2012.

With our strong participation, from Silver Sponsorships to hosting our networks at the conference, we have delivered value to attendees and created fond memories of fun-loaded experiences.

This year, things are even more exciting for us! Our Director of Customer Success, Mr. Arun Govindan, is delivering his session on the Dreamforce stage. He is one of our visionary leaders who transformed and supported many businesses to achieve success.

If you have missed your ticket, here’s a registration link to get a free virtual Dreamforce entry!

Schedule an appointment with our team to discuss how we help restructure your business to accelerate growth. Can’t wait to meet you all @ DF22!

Connect with our Experts Today 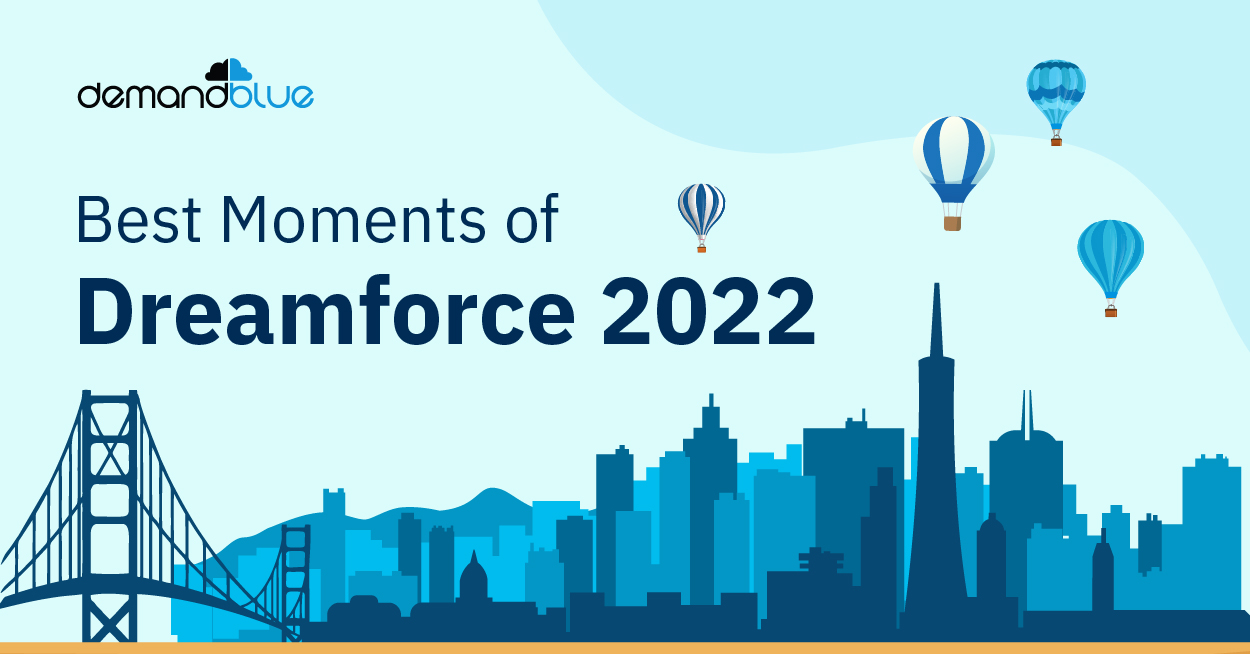 Dreamforce 2022:  A recap of all new announcements from Salesforce

We are just two weeks out of Dreamforce 2022, but many of us have already... 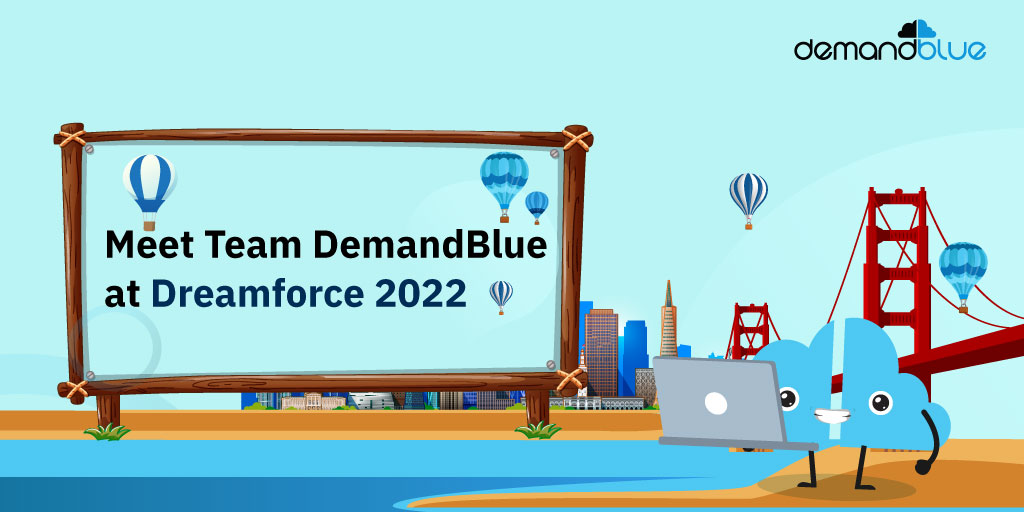 Are you excited to attend Dreamforce? We are just a few days away from... 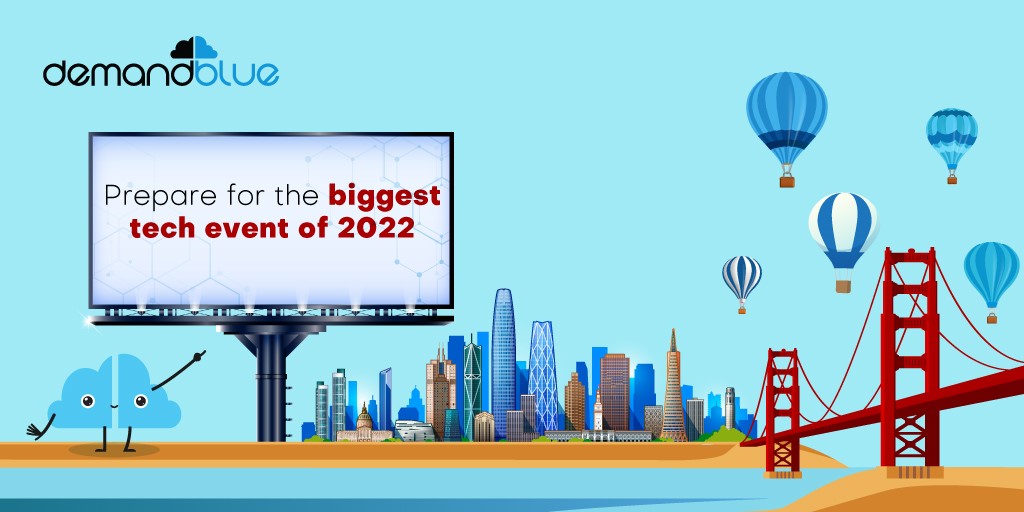 Prepare for the biggest Salesforce tech event of 2022

Have you started packing for Dreamforce 2022? With Dreamforce around the... 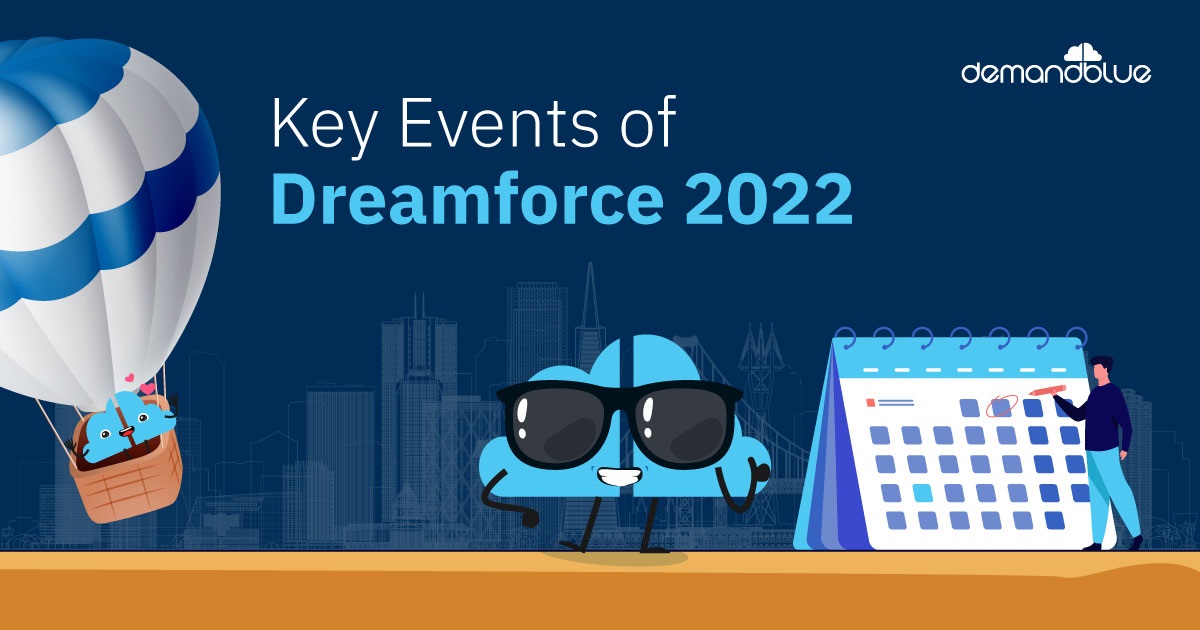 Hello Trailblazers! We know you are busy planning your Dreamforce 2022... 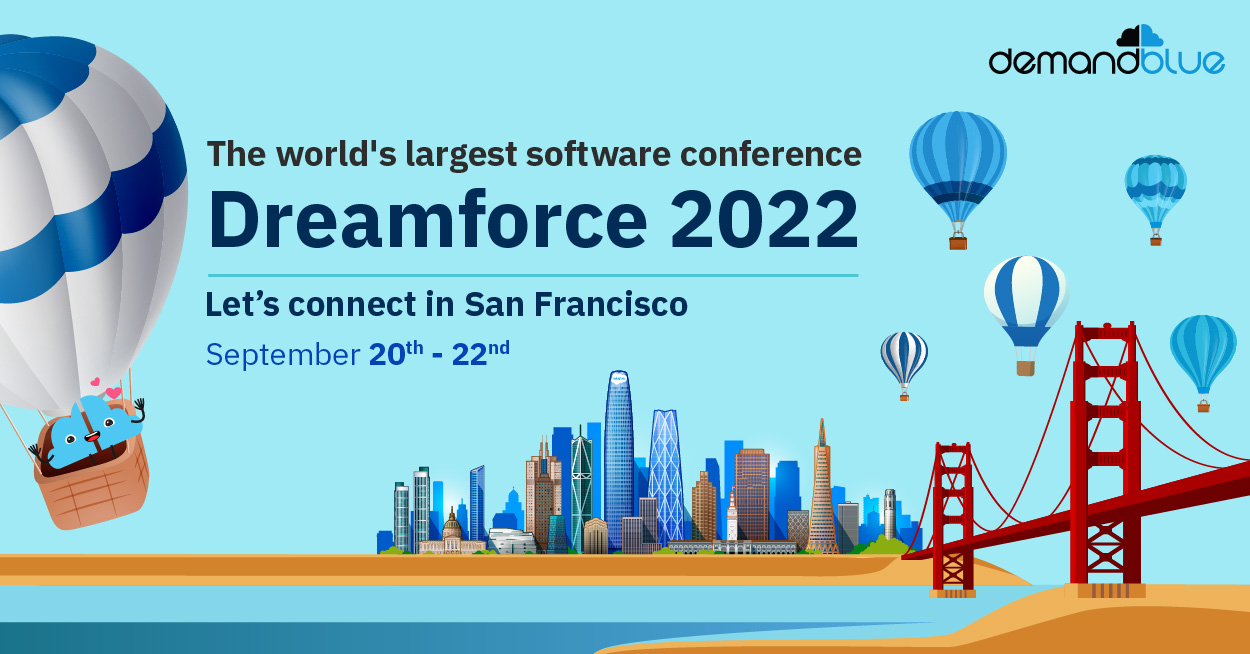 Hello Trailblazers, are you ready to attend the most impactful Dreamforce...

DemandBlue has been helping customers achieve success with Salesforce for over ten years. To learn more about DemandBlue’s unique on-demand services offering please reach out to one of our Salesforce experts. We look forward to helping you grow your business with DemandBlue!

Get In Touch
X
We use cookies on our website to give you the most relevant experience by remembering your preferences and repeat visits. By clicking “Accept”, you consent to the use of ALL the cookies. However, you may visit "Cookie Settings" to provide a controlled consent.
Cookie SettingsAccept
Manage Privacy Consent

This website uses cookies to improve your experience while you navigate through the website. Out of these, the cookies that are categorized as necessary are stored on your browser as they are essential for the working of basic functionalities of the website. We also use third-party cookies that help us analyze and understand how you use this website. These cookies will be stored in your browser only with your consent. You also have the option to opt-out of these cookies. But opting out of some of these cookies may affect your browsing experience.
Necessary Always Enabled
Necessary cookies are absolutely essential for the website to function properly. These cookies ensure basic functionalities and security features of the website, anonymously.
Functional
Functional cookies help to perform certain functionalities like sharing the content of the website on social media platforms, collect feedbacks, and other third-party features.
Performance
Performance cookies are used to understand and analyze the key performance indexes of the website which helps in delivering a better user experience for the visitors.
Analytics
Analytical cookies are used to understand how visitors interact with the website. These cookies help provide information on metrics the number of visitors, bounce rate, traffic source, etc.
Advertisement
Advertisement cookies are used to provide visitors with relevant ads and marketing campaigns. These cookies track visitors across websites and collect information to provide customized ads.
Others
Other uncategorized cookies are those that are being analyzed and have not been classified into a category as yet.
SAVE & ACCEPT